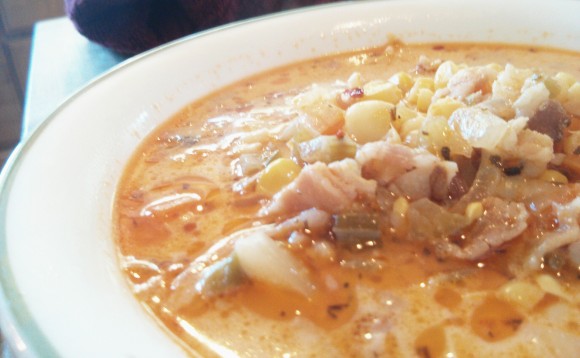 I had a heck of a time getting a picture of this seductive soup.  The bowl was getting dragged away from me!  It seems the culprit felt he had waited quite long enough and wanted it NOW!  I can’t say that I blamed him.  I had been fairly evil, overwhelming the house with the scent of first, roasted corn, then corn stock, then the bacon and onions, yeah… I think we all understand.

This isn’t a fast project, but it is easy and definitely worthy of your time!  Pick up some fresh corn.  Corn deteriorates very rapidly.  You want to start cooking it as close as possible to when it was picked.  Farmers Markets are much better then the grocery store.  If you are near a field of corn, maybe you can buy some from the farmer.  I got lucky and found some bi-color ears.  Those are super sweet!

You will want to begin by roasting the ears, in their husks.  Put them on a baking sheet in a 350 degree oven.  When they start to brown and steam a bit, turn them over.  The timing is pretty variable, dependent on how fresh your corn is.  You are probably looking at 20-30 minutes, but it’s not an exact science.

When the corn has cooled enough to handle after roasting, you will need to shuck it.  Once you have them all cleaned up, use a sharp knife to cut all the kernels from the cobs.  Cut just to the base of the kernels, not the pith underneath.  If it’s hard to cut, you are too deep.  Put the corn in a bowl and set aside.

Place the denuded cobs into a sizable pot to make stock.  Add one yellow onion, peeled and quartered, two celery stocks and one peeled carrot cut in 3-4 pieces.  For aromatics, I would choose a small cinnamon stick and one good bay leaf.  Fill the pot to about double the water to vegetables.  Put it on to cook.  Since this stock has no fat, you can cook it pretty briskly, unlike meat stocks that you need to simmer so the fat doesn’t emulsify into the liquid.  Or, this part of the recipe can be started in the morning and simmered slowly for hours.  You could even do it a day ahead.  Just cover your cooked corn kernels and refrigerate.

When you’re ready to make the soup you will need two or three cups of small diced mire poix (carrot, onion, celery), a couple minced fresh hot peppers and good bacon.  I like apple smoked bacon, in particular, especially for a recipe like this one.  Cut the bacon into quarter inch pieces or smaller.  Cook with the mire poix in a soup pot with a bit of olive oil.  When it’s nearly done, add two minced cloves of fresh garlic.  Do not over cook the garlic, or it will be bitter.

Strain your corn stock and add to the cooked vegetables.  Toss in a tablespoon of salt and some fresh black pepper.  If you would like potatoes in the soup, now is the time to add them.  I found some German Butter Potatoes at the Lake City Farmers Market.  If you can’t get to a Market, red potatoes or Yukon Golds would work, too.  The German’s needed to be peeled, due to rough, pitted exteriors.  If your potatoes have clean, unblemished thin skins, it’s up to you on that.  A lot of time, I don’t peel them.  I like the texture and color contrast in the finished soup.  One to two cups of small diced potatoes will do.  If you don’t have enough liquid, add either chicken stock or water to cover the vegetables.  Now is a good time to peruse the spice cabinet for flavors that inspire.  Coriander is a great choice.  I also added a dash of African Cayenne.  This is something they carry at World Spice on Western, below Pike Market.  They are my favorite source for really fresh spices.  (I’m planning a trip there soon.  Watch for the post.)  The African is hotter then regular cayenne.  It also has a lot of complex flavor, making it a regular go-to in my spice array.  Dried oregano completed my choices for now.

When the potatoes are done, add the cooked corn and cream to cover.  Bring it back up to temperature.  Add chopped flat leaf parsley and cilantro.  Adjust the salt and pepper to taste.  Use a touch of cider vinegar to really make those fresh flavors sing.  I like Braggs Organic Cider Vinegar.

You just made some amazing healthy, gluten free soup!  Watch out for the stampede headed your way!  Enjoy!